FROM hbt-GBG TO HOMOPHOBIA THERAPY 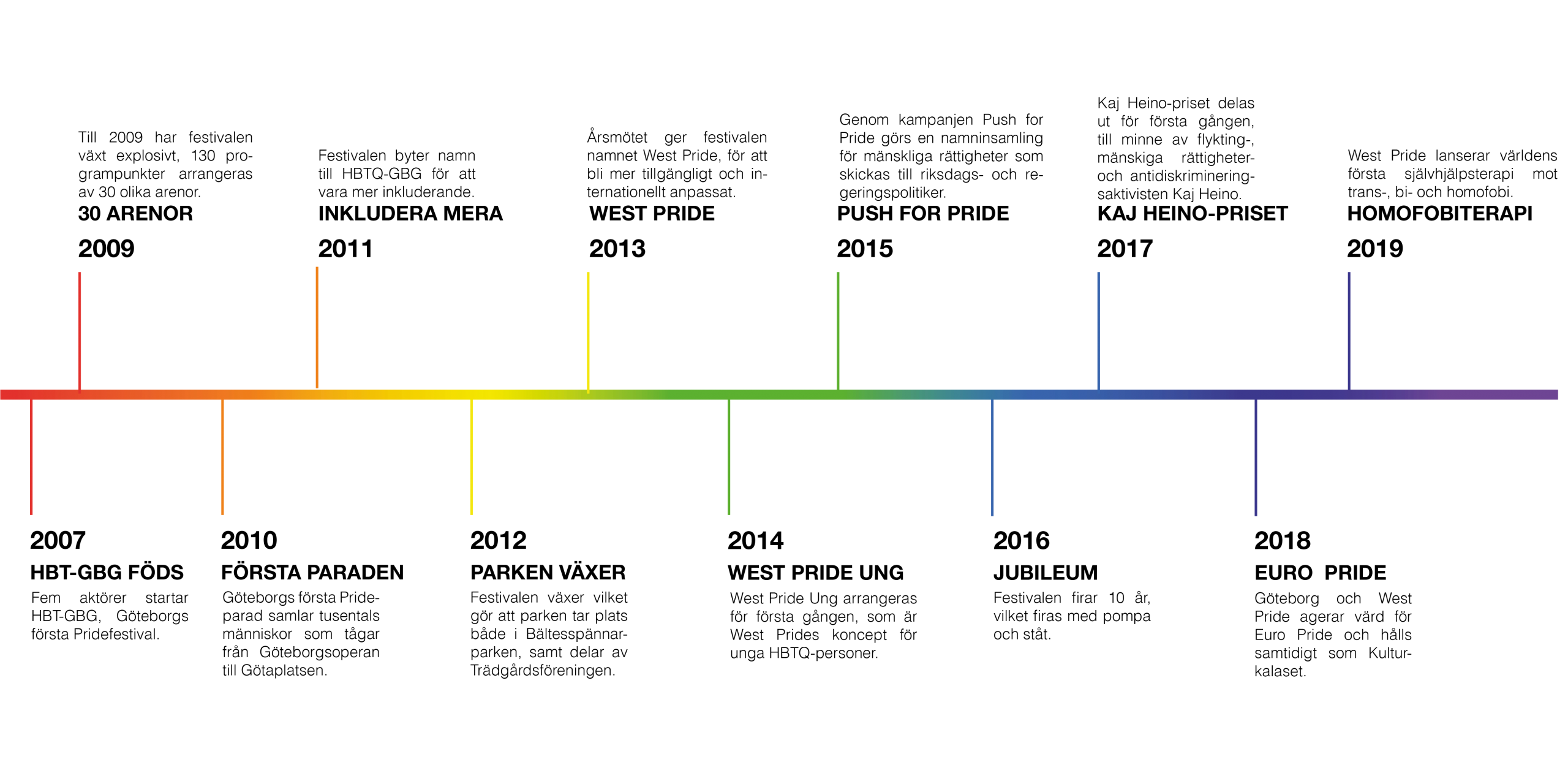 HBT-GBG expanded a lot during its first years. By 2009, around 30 different stakeholders contributed and the program had over 130 items which contained music, dance, theater, panel discussions, debates, film, exhibitions, parties etc. The festival had also an internation block with film screeings and panel discussions.

The Rainbow Walk, today Pride Parade, was arranged for the first time. Thousands of people marched together in the parade that started by the Göteborg Opera Hall and ended at Götaplatsen. The year after, 2011, the festival’s name was changed to HBTQ-festivalen (The LGBTQ-festival) to become more including. The same year was The Rainbow PArk, today Pride Park, in Bältesspännarparken in the centre of Gothenbyrg. Since the festival still expanded a lot the 2012 festival had to use space from Trädgårdsföreningen as well which is next to Bältesspännarparken.

During 2014 a lot of new areas was established to the Festival. West Pride Youth, which is West Pride own arrangement for young LGBTQ-people, was arranged for the first time at Frilagret. It became as an own festival within the West Pride festival and was very much appreciated. Another new thing that was new in 2014 was The Queer sing along. Nowadays it’s a classic feature at the end of the parade. Last but not least the Rainbow area was established where the festival’s seminars, panel discussions, theater, dance and much more is taking place.

The theme for WEst Pride 2015 was Push for Pride. The campaign was a “button machine”, placed in Nordstan, that passing people could push to show solidarity with human rights. All pushes generated in a list of signatures which later was sent to several members of parliament and government. Push for Pride was a campaign which was created in collaboration with Dragster Kommunikation that was nominated to Svenskt Design Pris (Swedish Design Price), for its graphic design.

The tenth festival was celebrated in 2016 with flying colours! The same Year, West Pride was collaborating with Utbildningsradion (The Public Education Radio) to develop West Pride’s school- and education material. The collaboration led to that several of the documentary films was screened during the fesitval.

The Kaj Heino award was for the first time handed out in 2017 as a memory of Kaj Heino, an activist within refugee, human rights, and anti-discrimination issues. Among other organisations, Kaj was active in West Pride since the start back in 2007, and was board member of Göteborgs Stads HBTQ-råd (Gothenburg City’s LGBTQ-council). The award is not a sum of money but a honorable diploma, and is given to the person/persons who worked in the spirit of Kaj Heino, as an activist in refugee, human rights and/or anti-discrimination issues.

The work of being a host city for Euro Pride, the traveling festival that is part of the European Pride Organizers Association (EPOA), had been going on for several years and in 2018 Gothenburg and West Pride finally got the honor to host the event. Every year, a European pride festival is given the rights to use the title EuroPride, but in 2018 it was the first time EuroPride was held in two cities the same year as both Stockholm and Stockholm pride also was hosting EuroPride 2018. The festival in Gothenburg was at the same time as Kulturkalaset (The Cultural Festival) and artists who performed was among others Boy George and Culture Club, Silvana Imam and Robert Fux. The amount of partipicants in the Pride Parade was 25 000 and over 50 000 spectators along the parade route.

Prior to the 2019 festival, West Pride released Homophobia Therapy, a self-help therapy in cognitive behavioral therapy that is a recognized method in psychology. Homophobia therapy is intended to counteract trans, bi- and homophobia. The therapy was developed together with a psychologist, has eight parts and can be listened to on Spotify.

2020 was marked by the Corona pandemic and the whole world had to change. Like many others, especially in the cultural industry, West Pride also had to cancel its festival to adapt to restrictions from the government and recommendations from the Swedish Public Health Agency. This is the first time West Pride has had to cancel the festival, a year that had very good conditions to become one of the best performances so far. Instead, West Pride focused on education at both schools and other organizations and businesses.

The idea for Global Pride was born when most Pride festivals around the world were forced to cancel due to the corona pandemic. The result was a livestreamed 27-hour Pride Festival that took place across all time zones starting June 27. West Pride took it for granted. Global Pride was organized by InterPride, the European Pride Organizers Association (EPOA) and other Pride networks spread around the world.

At the invitation of West Pride, the by then Sweden’s Minister for Gender Equality Åsa Lindhage, who is one of the few ministers in Europe who identifies as LGBTQI, gave a closing speech and she fights hard for LGBTQI issues. West Pride also contributed through a recorded live session with Dotter who came second in the Melodifestivalen (Swedish Eurovision Song Contest) with the song Bulletproof.

Together with the research company Insight Distillery, West Pride conducted a survey on the perceived life situation of LGBTQI people. The current survey shows that LGBTQI people in today’s Sweden feel insecure. 28 % avoid staying in certain places and in certain environments for fear of being exposed to discrimination or violence. Just over 70 % of LGBTQI people in Sweden hear derogatory comments, usually at the restaurant and tavern, but it also happens frequently at workplaces and at school.

2021: West Pride is taking place just when the restriciton are lifted

After a tough year where the festival was moved to the end of September and the situation still did not look stable just days before the festival week, West Pride managed to arrange a festival with Pride Parade through a rainy Gothenburg, fantastic program items in Pride House and a colourful program in Pride Park which was indoors in Eriksbergshallen. Parts of the program in Pride House and the entire stage program from Pride Park were streamed which reached a digital audience, both locally and globally.

West Pride continues the work of educating and informing about LGBTQI issues. This year, the festival is back in June and West Pride is held June 13-19. Hope to see you there!