West Pride is now opening its flag booking for this year’s official flag period, which is September 20 to October 3. This year, West Pride has chosen to supplement the usual rainbow flag with another flag in the range called “Progress Flag”. It is possible to choose which of the flags is desired to be rented.

The new “Progress Flag” aims to make intersectionality visible within the LGBTQI movement. The flag consists of five smaller stripes representing trans and non-binary people (bright blue, bright pink, and white), marginalized POC (people of color) communities/groups (brown, black) and also those living with HIV and the stigma as well as the prejudices that those people face, black stands for those who have lost their lives to the disease. 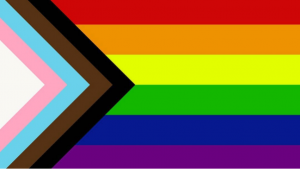 Flags are collected and returned at the Concert Hall: Götaplatsen 8, 412 56 Gothenburg.